They were even talking about Colonial Gardens.

“Right now, it’s three years later and not a thing done to it (Colonial Gardens). Except the yellow tape around it,” Downard said in his committee meeting.

Dan Marchal with Planning and Design Services, and Richard Jett, Historic Preservation Officer at Louisville Metro Government, both spoke before the committee about the existing landmarking process, as well as the demolition procedure for structurally unsound historic properties, and “the 106 process,” the federally mandated historic-landmark process.

The problem is, this topic was inappropriate for Downard’s committee as the Yates’ amendment isn’t even before his committee. It’s before the Planning/Zoning, Land Design and Development Committee.

The latter committee plans to vote on the amendment at its next meeting on July 17.

Click on view ‘Video” to the 6/18 meeting of the Ad Hoc committee:

(Yeah, if that video doesn’t load, don’t blame me. You weren’t meant to see it, see. That’s how Louisville works.)

Downard eventually apologizes for being “harsh” toward Marchal and Jett.

In an email obtained via open records request, Downard wrote to Councilman David James in April, conveying his sympathy with the out-of-state owners of the Colonial Gardens property, Carl Schmid, Jr. and Frances Schmid, and Leona Schmid Properties, LLC, all of Alpharetta, Georgia.


“I wonder if the family who owns Colonial Gardens that could not sell it 4 years ago agrees since it is now blocked by police tape with a for sale sign plastered along the side…,”  Downard wrote. (See below. Click to see full size.)

By the way, Councilman Downard, the Schmids are not destitute. Here’s an aerial view of their Georgia home:

Here’s some schooling based on 20 years of real estate experience. If the owners of Colonial Gardens are having trouble selling their property, revising Louisville’s landmarks ordinance is not the answer. Reducing their asking price? Ding.

Council members Attica Scott and Cheri Bryant Hamilton have yet, to my knowledge, made their position clear publicly on the Yates’ amendment.

More than 50 percent of the minutes from this particular committee’s meetings never make it online.

But who is paying attention to the landmarks ordinance?

While the general public may not have access to Downard’s committee’s minutes of the landmarks ordinance discussion, the Greater Louisville Association of Realtors reported it to its members: 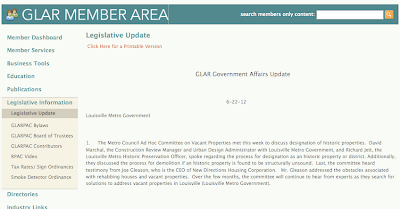 The Realtors Association staying on top of the Yates ordinance is of particular interest because a GLAR representative is reportedly on the exclusive and secret work group putting the final touches on the ordinance.