In 2018, the Kentucky Transportation Cabinet released a six-year, $8.5 billion, 1,400 project transportation plan for the state. It refers to the plan as SHIFT — The Strategic Highway Investment Formula for Tomorrow. And with a project the agency has dubbed “I-Move Kentucky” ramping up later this summer, Louisville will begin to feel the impacts of SHIFT before the end of the year. 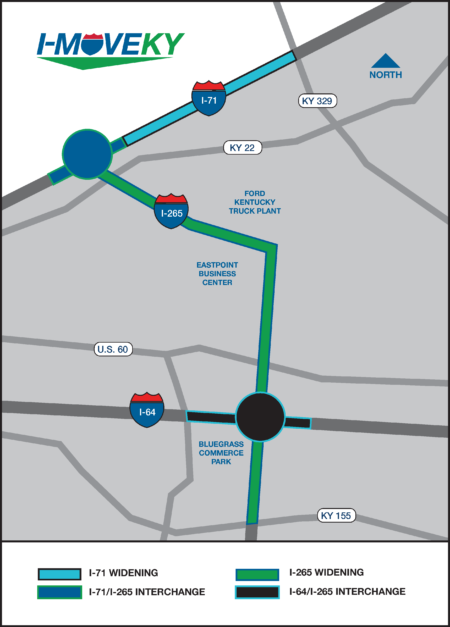 In all, the project is estimated to cost $180 million — an amount that is more than double the entire proposed capital projects budget for Louisville Metro Government ($86 million) and 7.5 times the capital projects budget for Metro Public Works ($24 million), based on the currently proposed 2020 figures. The I-Move Kentucky website calls the project “the largest interstate improvement project since the Ohio River Bridges Project” — which itself was a $2.6 billion investment in expanding the city’s freeways.

The four projects of I-Move Kentucky represent only a fraction of those that KYTC has prioritized for Jefferson County. Of KYTC’s top 10 statewide priority projects, six are located within the city-county; with four more Jefferson County projects ranked in the state’s top 25.

Added to SHIFT’s list of “statewide” projects is a list of “regional” priority projects. Ten of the “regional” projects ranked in KYTC’s top 50 for the north region of the state (an area that also includes Northern Kentucky, Lexington, and Frankfort) are for Jefferson County.

In all, these 20 projects represent a possible $725 million of investment from the state in Jefferson County’s transportation system.

The map below shows where each of these 20 projects would be located within the city. By clicking on a project line or point, you can see where it ranks in SHIFT’s overall list of priorities.

In considering KYTC’s plan and how it would affect the city, what stands out is how out of line it is with Metro Government’s own transportation plan for the city.

In 2016, Metro published a comprehensive transportation plan called Move Louisville. In the plan, the city prioritized a number of projects that are on roadways controlled by KYTC — Broadway, Main Street, Dixie Highway, Preston Highway and Story Avenue, among others.

The goal of those projects was to create a more focused transit network, promote mixed-use, walkable development, slow traffic speeds, encourage multi-modal transportation, and reduce the number of miles driven by Louisvillians.

And yet SHIFT is not at all aligned with the goals of Move Louisville. Put more bluntly, the two plans are actively working against one another.

In discussing issues facing the city before Metro Council recently, Louisville Forward’s Mary Ellen Wiederwohl stated that transportation is the city’s foremost problem. As the head of the economic development department for the city, Wiederwohl argued that the current transportation infrastructure and development patterns undermine economic growth by making it difficult for people to get to and from job opportunities in suburban employment centers. She cited TARC’s inability to run efficient, regular routes as a factor in limiting people’s ability to access jobs.

The projects identified in SHIFT will only further the problem described by Wiederwohl.

Consider: Nine of the 20 projects shown in the map above are interstate projects. Twelve of the projects are road widening projects. Each of the 11 projects not on an interstate is located outside I-264.

Instead of responding to sprawl in ways that would counteract it, as Move Louisville attempts to do, SHIFT treats sprawl as a foregone conclusion.

The reality is that the state isn’t simply responding to the demands of sprawl. By continuing to invest in car-reliant infrastructure, KYTC is providing incentives for more of this kind of development. The result will be a worsening of the economic and transportation problems that that type of investment creates.

Move vs. SHIFT: What Gives?


Why Metro Government leadership does not do more publicly to raise the point that SHIFT is not aligned with the city’s own goals is a question unto itself.

Perhaps the city just does not see the point in fighting KYTC on this — another losing battle with the state. Frankfort in general is notoriously non-responsive to city governments — Louisville Metro included. One need only look at the current pension crisis to see how the state will prioritize its own initiatives, even if it means crippling municipalities in the process.

KYTC is perhaps just another hard-to-work-with state agency in this regard. For instance, observe how long it has taken Metro to convert Third Street downtown to two-way (a city project on a state road), and you can see how a seemingly straightforward project can become complicated and drawn-out. It’s been 15 months since the first block of Third was converted to two-way, and the project still is not complete.

Another possibility seems to be that Metro Government leadership recognizes where the state’s priorities are (suburban highway and interstate development) and is investing in areas where it knows KYTC will not. In essence, the two plans are serving as complementing puzzle pieces, and not contradictory plans, for how the city’s transportation network will be built out.

That conclusion would seem to contradict Wiederwohl’s assertions before Metro Council and the stated goals of Move Louisville itself. However, Mayor Greg Fischer and Greater Louisville Inc., the city’s chamber of commerce, have also publicly and repeatedly championed job creation in the manufacturing and logistics sectors — areas that would benefit greatly from the kinds of projects SHIFT is promising.

Whatever Metro Government’s true feelings are with regard to a potential $725 million investment in suburban sprawl, what’s also true is that SHIFT and Metro’s silence on the matter undermines the community engagement and advanced planning that went into creating Move Louisville.

Louisvillians should be furious that we spent years and millions of dollars on a plan and set of goals for our future, and that that plan and those goals are being roundly ignored.

Chris Glasser is the executive director of Bicycling for Louisville. This article is part of an occasional series.