Summertime in Louisville is always glorious. The city is filled with fun outdoor events all summer long – music festivals, craft fairs, farmers markets and more. A favorite way to experience all Louisville has to offer in the summer is to visit one of the city’s incredible parks.

Louisville is fortunate to be threaded with an enviable park and parkway system, designed by Frederick Law Olmsted and his sons, built as the city expanded in the early 20th century. That means most neighborhoods in Louisville have a park nearby to enjoy and explore, and that green footprint keeps expanding.

Starting in the mid-1990s, downtown Louisville profoundly changed with the addition of Louisville Waterfront Park, transforming a once industrial riverfront into a vibrant oasis that continues to expand.

Louisville’s newest green landmark, The Parklands of Floyds Fork, spans a massive 3,800 acres of preserved forest, wetlands, trails and public spaces connecting the eastern and southern reaches of the Metro area. And an exciting initiative, the Louisville Loop, connects — or will soon connect — many of the parks and eventually will encircle Louisville with a 100-mile trail system.

To jumpstart summer adventures, here is a list of Louisville parks that offer great outdoor experiences and a range of events and activities. Note that most parks are open from dawn until dusk with exceptions made for special events, but check websites for specific information.

Follow Southern Parkway until it runs out to find this 700-acre Olmsted Park in Louisville’s South End. First acquired in 1888 and built around an old-growth forest, this hilly, tree-filled park is known for its breathtaking scenic views, as a great place to take a challenging walk or bike ride and as a fun place to gather for a family cookout.

And for local horse lovers, Iroquois Park has bridle trails for peaceful horseback rides. Discover more about the history, find a park map and more from Olmsteadparks.org.

Iroquois Park is also home to a beloved outdoor venue, the Iroquois Amphitheater. Built in the 1930s as a WPA project and lovingly renovated and restored in 2003, the amphitheater hosts family-friendly events, local performing arts groups, live concerts by nationally known bands and more, all summer long. For a schedule of coming Iroquois Amphitheater events, visit iroquoisamphitheater.com.

And if you get hungry while exploring the park, stop by Louisville’s famous Vietnam Kitchen on nearby Mitscher Avenue, or get a quick pick-me-up treat at Louisville’s newest gourmet popsicle spot, Cocoberry Pops on Woodlawn Avenue in Beechmont. And if you want to experience a living piece of Louisville history, make time to visit The Little Loomhouse to watch a weaving demonstration or to participate in a workshop. Louisville’s beautiful Cherokee Triangle is home to this gem of a park – the green centerpiece of a thriving historic neighborhood. Willow Park is tiny compared to its nearby big sister, the rambling and hilly Cherokee Park, but it’s well-known as a gathering spot for parents with small children enjoying the fenced-in play area or as a shady place for an impromptu afternoon picnic lunch, especially on the steps of its iconic gazebo.

Willow Park is a short walk from Bardstown Road, so great food and unique shops are easy to find. The original Heine Brothers’ Coffee shop and Carmichael’s Bookstore share a building just a few blocks away on Longest Avenue. Swing by for a new book and a cup of coffee to take along for a perfect afternoon in the park.

And if you’re in the mood for a locally famous sweet treat, walk just a few more blocks for a Kizito cookie at their Bardstown Road bakery. The iconic Willow Park gazebo is home to a summer concert series and more than a few marriage proposals. Image: Olmsted Parks Conservancy

Known for its 2.4-mile Scenic Loop and its beautiful, 400-acre spaces, Cherokee Park is one of Louisville’s original parks designed by Frederick Law Olmsted. With hilly, winding roads that open into lovely vistas, meadows and woodlands of the Beargrass Creek valley, Cherokee Park is one of the city’s most popular outdoor spaces at any time of year.

The Scenic Loop is divided into two one-way lanes – one for vehicles and the other for walkers, runners and bikers – making it perfect for an ambling, after-dinner stroll or a challenging early-morning run. Cherokee Park also has woodland walking paths for quiet contemplation, a golf course and several playgrounds and shelters for picnics and gatherings.

The Hogan’s Fountain Pavilion, a midcentury modern structure in the heart of the park, buzzes with activity as families congregate for cookouts. Cherokee Park’s Big Rock, found at the bend of Park Boundary Road and Valetta Lane, is another well-known gathering spot with a playground, historic picnic shelter and trails along Beargrass Creek home of the eponymous Big Rock.

This location also hosts the annual Big Rock Jazz and Blues Fest each October, organized by the Olmsted Parks Conservancy and is one of the best neighborhood festivals in the Highlands. To find out more about Cherokee Park, including a map of all its twists and turns, visit Olmsteadparks.org.

Cherokee Park connects to most of the Highlands on the south side of Eastern Parkway, so find a quick treat as close to the park entrance as possible. The Highlands Comfy Cow on the corner of Bardstown Road and Eastern Parkway is a good bet. Grab a coffee across the street at Day’s Coffee if you need a pick-me-up, and be sure to stop by one the neighborhood farmers markets – The Original Bardstown Road or Douglass Loop Farmers Markets – for a perfect Cherokee Park Saturday morning. 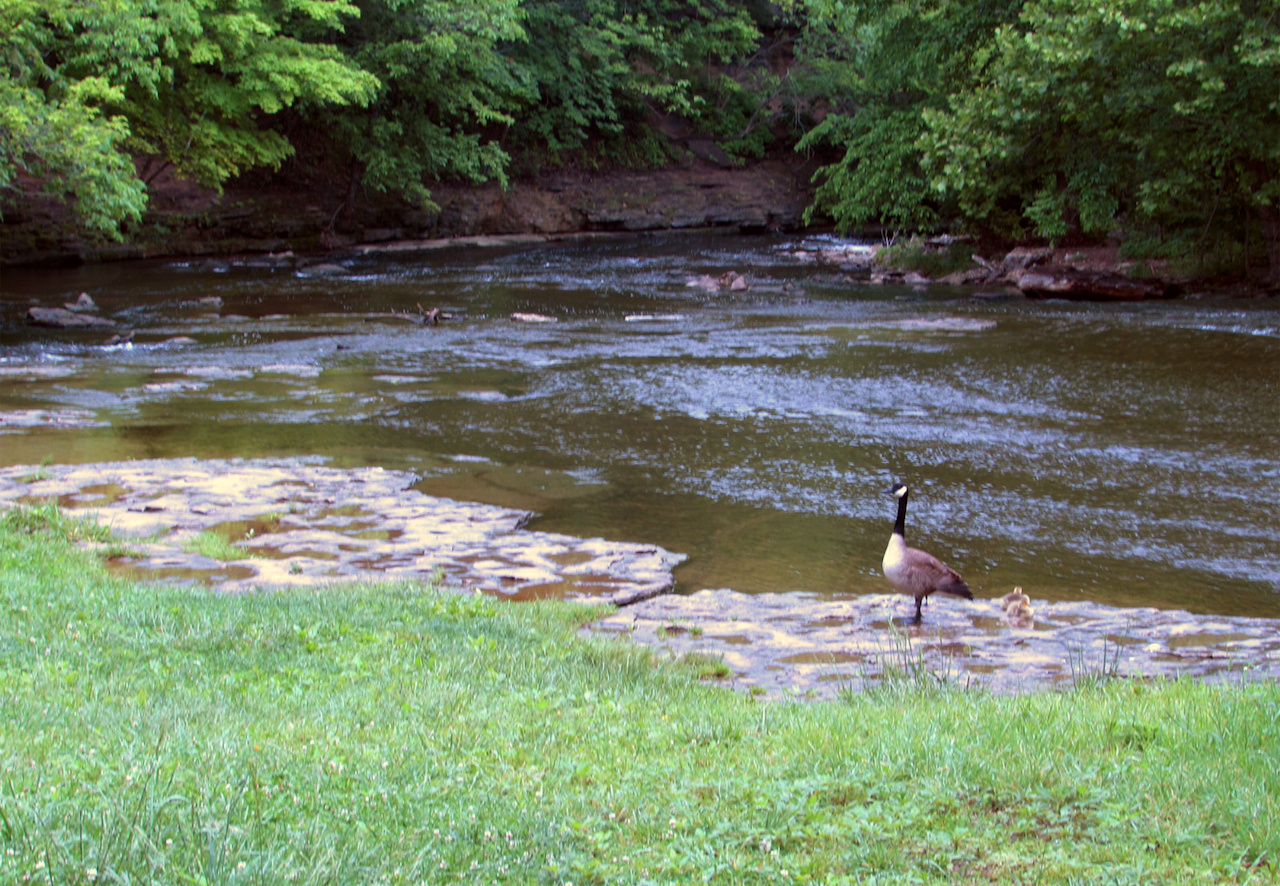 A winding road with a view in Cherokee Park, captured early in the morning. Image: George H. Jones Find a path into the woodlands of Cherokee Park. Image: William Wells

This once industrial wasteland on the banks of the Ohio River is now one of the country’s most notable urban parks. Louisville Waterfront Park, designed by internationally renowned Hargreaves Associates, has been recognized worldwide for both its design and environmental impact. Starting with the approval of a master plan in 1991, and continuing in phases, Waterfront Park currently spans 85 acres and reconnects much of downtown to a waterfront that was completely inaccessible for many years.

The next phase of the park includes adding 22 acres that will reconnect River Road and extend Waterfront Park west into nearby Portland. Find out more about Louisville Waterfront amenities, layout, events and what’s in store for the future at louisvillewaterfront.com.

Food trucks line up nearby most days of the week if you need to refuel while at Waterfront Park. Catch a minor league baseball game at Louisville’s Slugger Field, or grab a bite and a beer at Against the Grain Brewery inside. And if you walk the Big 4 Bridge to Jeffersonville, try nearby Portage House or Parlour Pizza. One of the most popular Louisville Waterfront spots, the Big 4 Bridge is for pedestrians only and connects downtown Louisville to Jeffersonville, Ind. Image: Steve Wiser A night view of Waterfront Wednesday crowds and the lights of the Big Four Bridge at night make a spectacular sight. Image: DroneUp502

The Parklands of Floyds Fork

Established by 21st Century Parks, a nonprofit organization, and first opened to the public in 2011, The Parklands now totals nearly 4,000 acres of natural beauty, a mix of both beautiful landscape design and preserved landscape across four parks. Located in eastern and southern Louisville, just 20 minutes from downtown, along Floyds Fork Creek, all four parks connect via a nearly 19-mile recreational trail along with a scenic park drive.

With more than 60 miles of hiking, biking and paddling trails, as well as playgrounds and spray parks, The Parklands is filled with spaces the whole family can explore. You’ll also find several event spaces, a silo converted into a scenic lookout and well-designed picnic shelters throughout the park that can be reserved for special gatherings. Canoe, kayak and bike rentals are available on site via Blue Moon Canoe & Kayak of Kentucky. Find out more about The Parklands – the layout, history, future vision, planned events and amenities – at theparklands.org.

If you’re in the mood for a great, off-the-beaten-path meal on your way home from The Parklands, take Bardstown Road toward Louisville and stop by Dakshin in Buechel, a popular Indian restaurant. The well-known and delicious Bootleg Bar-B-Q is just a few miles from the Broad Run Park entrance and makes great carry-out for a quick meal at home after a long, glorious day in the park. With many parts of The Parklands built on former farmland, the park designers integrated many of the structures, including barns and silos, into the landscape design to acknowledge its history. The Parklands of Floyds Fork includes 19 miles of paved paths that connect all four parks. Image: The Parklands

This 16-acre park, designed by the Olmsted brothers as a green oasis for Victorian-era Old Louisville, still serves as a respite for this densely populated historic neighborhood. Built on land once owned by the DuPont family, it was once the site of the historic Southern Exposition from 1883 to 1887 – famously lit by Thomas Edison with the then-largest incandescent light bulb installation ever.

Characterized by elaborate walkways, its canopy of trees and pergola serve as the perfect backdrop for many local photoshoots. Central Park also contains a playground, spray fountain and tennis courts along Park Avenue, but it’s most well-known for annual summer performances by the Kentucky Shakespeare Festival, continuously performed in the historic C. Douglass Ramey Amphitheater each summer since 1960. Find out more about this Olmsted Park, including its history, visitors center hours and more at olmsteadparks.org.

If you want to take a walking tour of the gorgeous historic neighborhood, here’s our Old Louisville guide including details about its architecture, nearby restaurants and more. 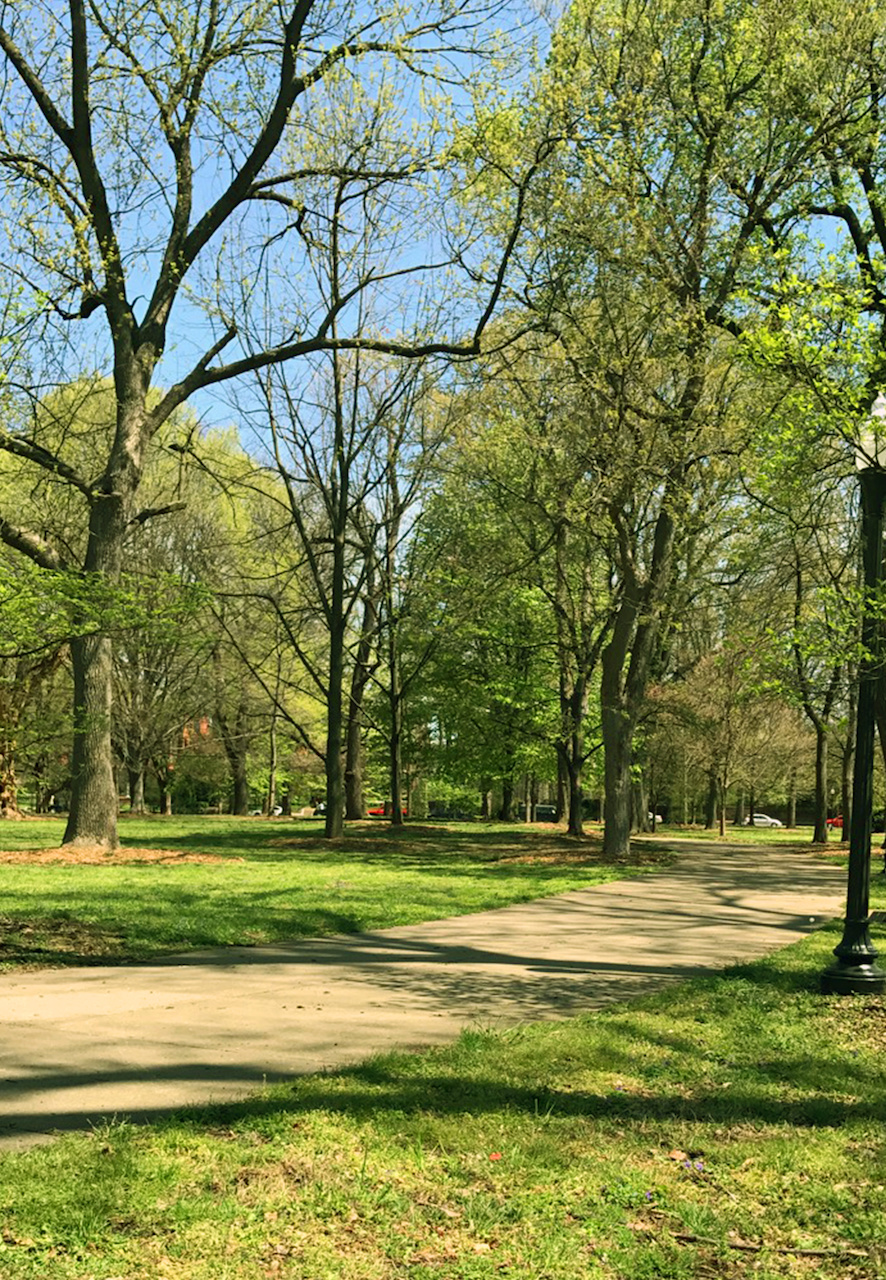 Many of the trees in Louisville’s Central Park date back to its founding in 1906 and provide a green, shaded respite from the summer heat. There are even more great parks throughout Louisville, including the Olmsted-designed Shelby, Shawnee and Tyler Parks, all worth exploring and enjoying on a hot summer day.Visit the Olmsted Parks Conservancy online to learn more about Louisville’s historic Olmsted parks and to find out how you can get involved. And check out the Metro Parks website for a comprehensive listing of all city-owned parks, including Jefferson Memorial Forest.