You may have noticed an array of food trucks rolling around Louisville this summer. It’s no secret: They really are everywhere! There are so many choices, which means there are so many questions. What do the food trucks offer? Is the food really good? And most importantly, how do I find out where the food trucks are located from day to day? Well, fret no more. StyleBlueprint did the hard work for you and put together a food truck guide so you can focus on filling your belly with inventive eats from our fellow Louisville entrepreneurs.

Food trucks are best followed on social media, as that is the way they can constantly update their locations and status. We have included their Facebook (F) and Twitter (T) handles below, as well as their phone numbers, so you can find your next best meal. Enjoy! 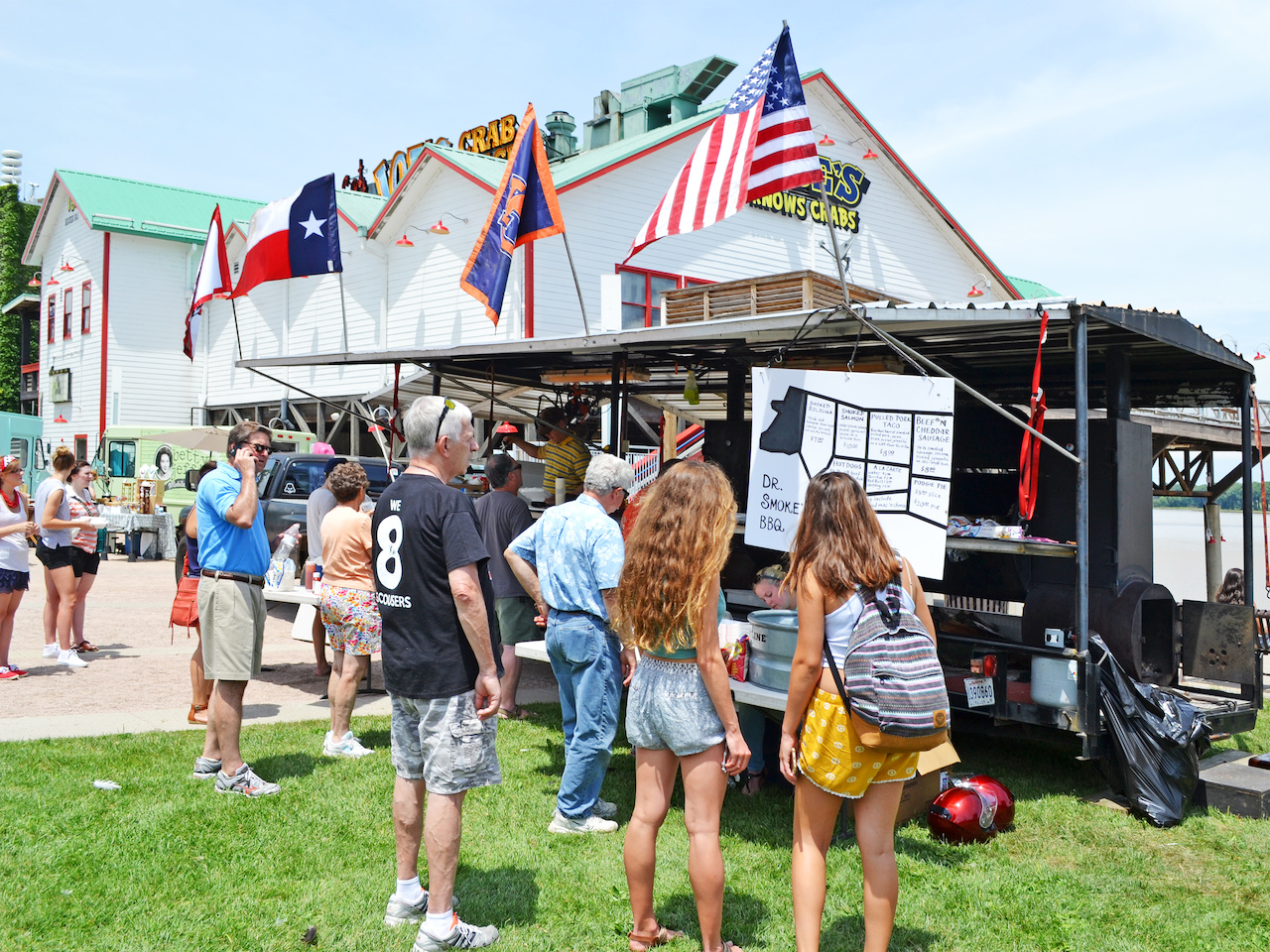 Boo Boo’s Smoke Shack is one of Louisville’s top-rated trucks, usually found downtown by the Humana building and KFC Yum! Center. Louisvillians love their delicious barbecue food, and people can’t seem to get enough of their loaded tots (even the buffalo chicken tater tots). Be sure to order one of their specials, the Huckleberry, which is a smoked hot dog topped with pulled pork on a bun. Remember to top everything with their homemade barbecue sauce before you eat it.

Boss Hog’s promises to have the best barbecue in Kentucky. Customers rave about their juicy barbecue sauce, jumbo cheese dogs and reasonable portion sizes — ideal for any lunch break. But they’re also known for their rib tips, tacos and chicken wings (that need no sauce, according to their fans). They are all over the Louisville area but often are at Kentucky Shakespeare in Central Park during the summer, so you can eat there on your next fun date night.

Get your intake of Southern-style cooking and barbecue at Moe-licious BBQ. They cover all the bases with pork, chicken and beef brisket on the menu. Moe is all over the area, going up to Bedford, Ind., and even Harlan, Ky., introducing the region to this Moe-licious food.

The friendly owners of this Scotch-Irish barbecue truck dream of opening a restaurant some day, and, from the looks of it, they’d have quite the fan base. Although labeled a barbecue truck, this joint has plenty of classic international fare as well, like fish and chips and shepherd’s pie. Don’t forget to try their poutine fries with gravy.

Dr. Smoke BBQ sets up at farmers markets and around town, pulling a massive smoker with flags. You can smell his deliciousness when you pull into the parking lot. Definitely try the pork sandwich, which melts in your mouth. Dr. Smoke is a Texan, which means you are not going to need any sauce on your barbecue; he dry rubs and smokes everything to perfection. 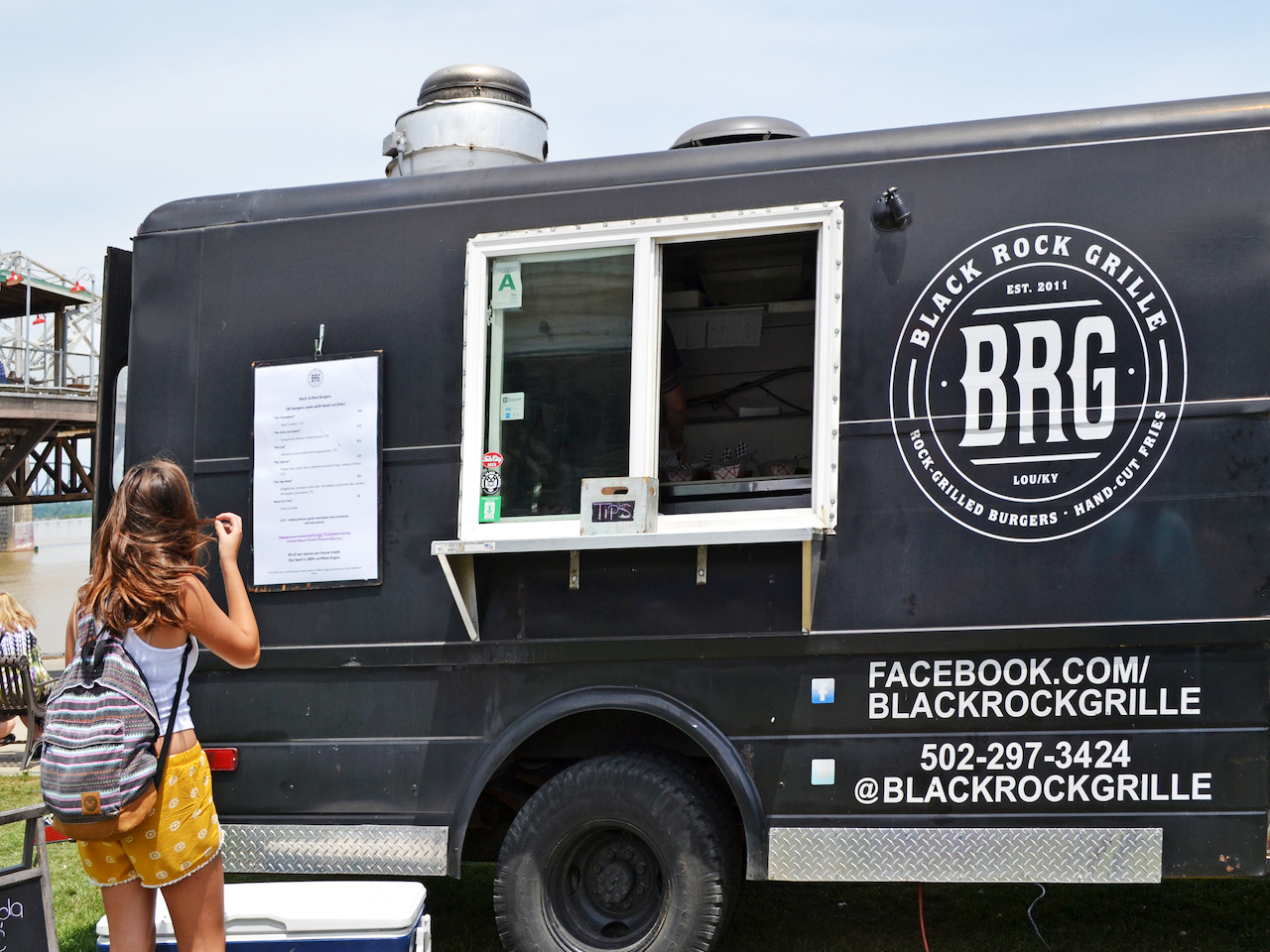 Black Rock Grille is known for their delicious burgers.

Did someone say chicken? They have classic Southern comfort food ideal for any day, such as the fried chicken and waffle combo. Don’t miss the chicken tacos and the chicken gyros. They pretty much cover every base on how to prepare chicken, and the prices are unbeatable. Sometimes they have a pop-up grill at the Springhurst Kroger with a limited but fantastic menu.

You can’t miss the hot pink ambulance and trailer known as Lexie Lu’s, offering hamburgers, nachos and quesadillas all around town. If you can’t decide on what to order, we recommend the Belly Blue Burger or the Smash Burger. They make their own bacon, too, so be ready to add that into your order, as well. Find them around town but always at the Douglass Loop Farmers Market on Saturdays from 10 a.m.-2 p.m. and at Shakespeare in Central Park on performance nights.

Welcome to the only place in Louisville where you can get a rock-grilled, grass-fed burger and hand-cut fries with house-made ketchup. If that’s not enough to make you want to try it, this food truck has a 4.9 star rating and is a local favorite. But back to the fries … they have many varieties, including roasted garlic/parmesan, jalapeno/queso/salsa fresca, chorizo/queso blanco/cilantro and scallion/gorgonzola/bacon. That could be your meal right there. Find them at festivals all over town and at the Foxhollow Farm Summer Concert Series.

Since 1996, The Get It On a Bun at Booty’s food truck has been driving Louisville streets serving up their delicious chili, hot dogs and hamburgers. They have “food so good you’ll smack yo momma!” Their slow-roasted pork won “Best of Louisville” last year, and people rave about their house-made chipotle mayo. In addition to things you can get on a bun, they also have great salads. They always post a day in advance of where they will be so you can plan your next meal with them. You don’t have to travel to Maine to get a lobster roll, or a “lobsta” roll, as they call it. Try the clam chowder, lobster bisque and cheddar biscuits. This is very fresh seafood, and because it is lobster, expect to pay more. Lobsta rolls are $17, but it is very high quality and totally amazing.

Long gone are the days where you have to go to an authentic Japanese restaurant for your sushi fix. The Louisville Sushi Truck makes fresh sushi on the go. Try the Crunch Munch and the Derby City Roll. Many people add eel sauce or spicy mayo to the rolls for an extra punch of flavor. They are often downtown, at Waterfront Plaza or in the medical center, but you also can try them at Shakespeare at Central Park during the summer. 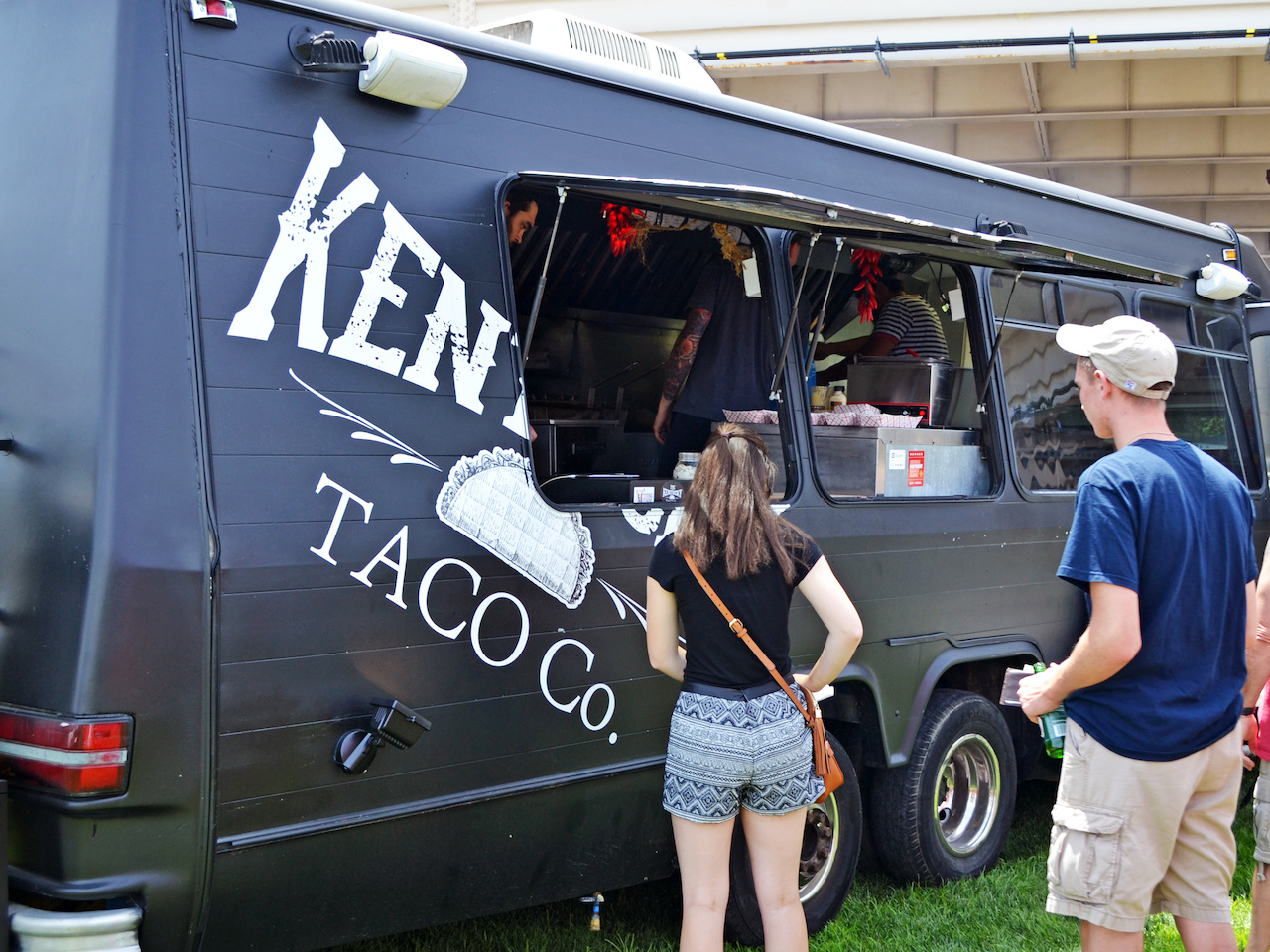 The only Cuban food truck in town, where you can get your fix of a classic Cubano sandwich, congris (black beans and rice) and plantains — all quick and ready made for you. Find them around town and at the Flea Off Market.

Ramiro’s Cantina is a brick-and-mortar Mexican food restaurant on Frankfort Avenue. They take their show on the road with Ramiro’s Cantina on wheels, one of the only food trucks that offers alcohol. Try the tacos, margaritas and all the other authentic family recipes Ramiro creates — all are delicious!

Zoom Zoom Yum has a wide selection of fresh, made-to-order Mediterranean food served perfectly seasoned and piping hot. Try the gyro, or you can order the gyro meat served over basmati rice. There are plenty of wraps and meats, and it would take a while to get through the whole menu, but we are up to the challenge. They are a fixture around town and at office parks, as well as nightly at Shakespeare in Central Park.

Try food from all around the world at the Traveling Kitchen food truck. This food truck offers street food inspired by several countries. Where else can you get dumplings at the same place as tacos with kimchi? One piece of advice: If soup is on the menu, always — always — order it.

“Soul food served on tortillas” is how The Kentucky Taco Company describes its cuisine. Some of their food menu items include the roasted pork taco with tomato jam and smoked tomatillo sour cream, the Sloppy Joe Taco and the Fried Chicken with Mac-and-Beer Cheese Taco. They have quite a following and long lines — a true sign of deliciousness. 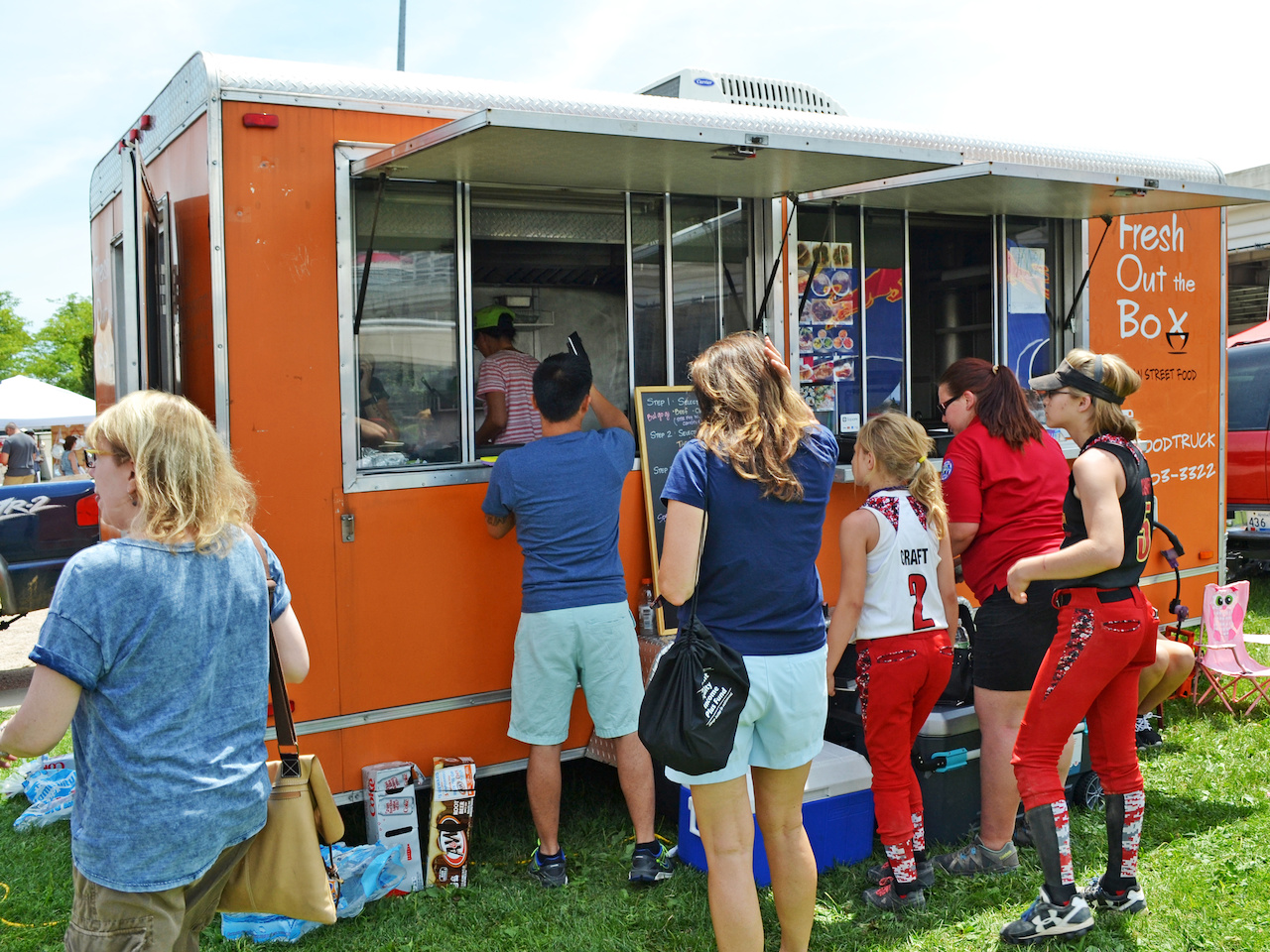 Fresh Out the Box qualifies as international AND healthy.

T: @FOBFoodTruck | F: Fresh Out of the Box

Get your Asian food fix with this food truck that serves Chinese, Korean and Vietnamese food. Known for its delicious fare, friendly employees and reasonable prices, it has wonderful cold and hot food. We loved the sesame noodle salad with cucumber, along with all of the yummy veggies. 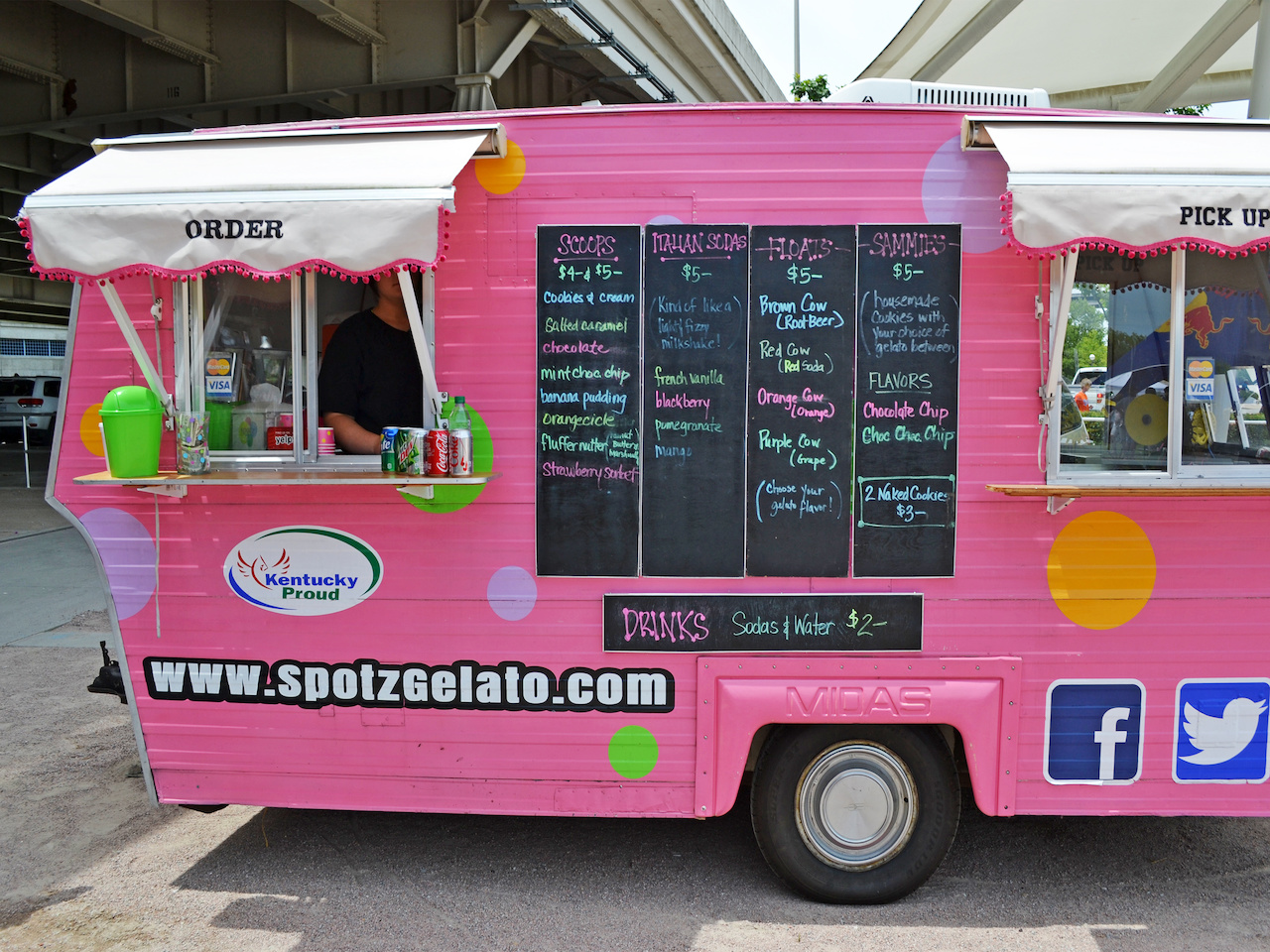 What better way to satisfy your sweet tooth than with Louisville’s own dessert station on wheels. Louisville Dessert Truck offers a variety of treats, including cookies, cupcakes, bourbon ball brownies and fresh-made paletas. They are usually (and brilliantly) located near all the other food trucks, so you can eat dessert after your main meal.

So, there you have it. There’s a lot of eating to do around town, so make sure you follow each of these rolling restaurants and keep up with where they are. Your tastebuds will be oh-so-happy!

Looking for more of a sit-down, restaurant-style meal? Download our SB App and you’ll have a great guide to the local dining scene.