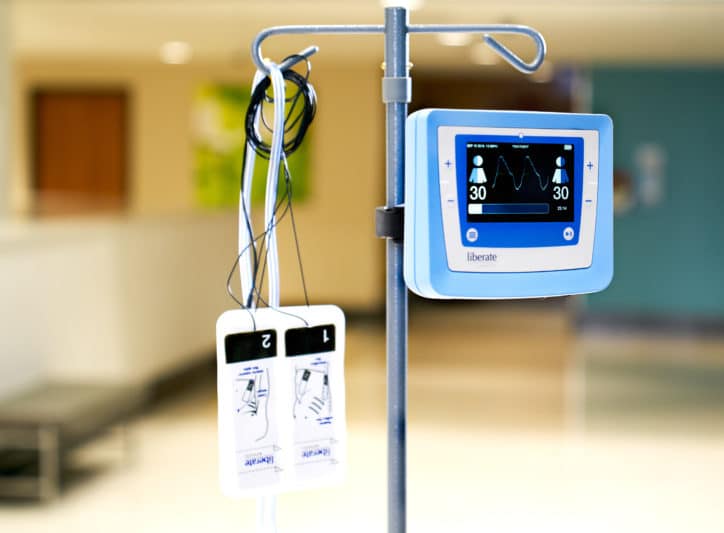 Mechanical ventilation has been in the news a lot lately as it has been used increasingly in coronavirus treatment.

A ventilator works by bringing in oxygen to the lungs and taking carbon dioxide out of the lungs. It can be inserted through the mouth or nose, and down the trachea, or through a surgical opening, via tracheostomy.

The issue is that the longer a patient is on a ventilator, the more problems that can be introduced, including a weakening of the breathing muscles and cardiac complications. It’s also costly: For every day a person is dependent on mechanical ventilation, costs increase by $1,500.

Liberate Medical, a medical device company located in Crestwood, has developed a product that shows promise in shortening the time spent on a ventilator. Their VentFree stimulator applies non-invasive electrical stimulation to the abdominal muscles during exhalation in order to prevent abdominal muscle atrophy and reduce ventilation duration in mechanically ventilated patients.

Angus Mclachlan, Liberate Medical’s co-founder and CEO, came to the Louisville from his native Scotland in 2011 in order to work for Apellis Pharmaceuticals. Mclachlan worked on the device hardware and software development side at Apellis, as well as in clinical protocol development, preparing grants and establishing clinical and commercial partnerships. It was during his tenure there that he became aware of the research behind mechanical ventilation.

After developing the VentFree stimulator Liberate Medical performed a double-blind pilot study with a group of 20 participants. The result of the study was that the ICU length of stay and ventilation duration appeared to be shorter compared to the control group. Last October, the company received CE marking for stimulator and ISO 13485 certification (the standard for a Quality Management System for the design and manufacture of medical devices).

The product has received the “CE mark” or certification mark from a European Union regulatory body that allows device makers to sell their products. Liberate Medical is at the beginning of the effort to commercialize the product. The company is starting with a soft launch in a limited number of countries and then will expand throughout the entirety of the EU.

“The process of FDA approval is likely to take about two years, but we have applied for the FDA Emergency Use Authorization. And last year we received the Breakthrough Device Designation from the FDA, which helps with the normal FDA process,” Mclachlan said. (The Emergency Use Authorization authority allows the FDA to help strengthen the nation’s public health protections against CBRN threats by facilitating the availability and use of MCMs needed during public health emergencies.)

Mclachlan decided to launch Liberate Medical in Louisville for several reasons, aside from its increasingly strong health care sector . “I had already made contacts here and they were easy to reach and communicate with. I really like the city and the cost of living here makes it quite attractive. It’s just a great city.”